Thursday 6th August we went to Goblin Combe for a morning of woodland fun.  It was a drizzly, overcast yet sticky morning when we arrived and were greated by Goblin Combe Adventures Alice, who was our lead for the morning.  After sanitising our hands we all sat on an upturned bucket in family groups (adhering to Covid-19 guidlines) and were talked through our morning by Alice.  We all played a game of ‘Penguins’ to warm and wake up our bodies, followed by a game of ‘Splat’.  We then took our buckets and headed on a 10-15 minute uphill trek to the woodland clearing that would be the setting for the morning.  Alice had given the children an ‘Eye spy’ sheet each to look for objects and creatures on the way, including Goblin Combes very own chicken-sized, bush loving, tree dwelling dinosaur!  The  first woodland game was a game similar to hide and seek with Alice protecting her gold treasure.  The kids rocked it! Next we paired off, one person being blindfolded and guided to a tree, but not in a direct route.  We had to feel the tree and be guided back to the start.  On removal of our blindfold we then had to locate the tree we were originally taken to.  Roles reversed after.  The kids found it funny, adults not so much! The nerf guns came out next for a laser battle.  Such fun!! 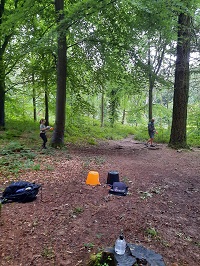 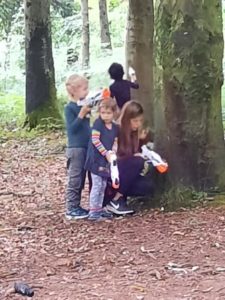 The games ended with a game of ‘Capture the flag’ using the Nerf guns.  We then had to look for twigs that ‘snapped’ to build our fire so we could toast marshmallows.

We were amazed with Alice and her fire skills.  Who knew that dipping cotton wool with petroleum jelly and setting it alight would result in a long burning fire, and in the rain?!!  Everyone enjoyed toasting their marshmallows in the fire.  Yum!  Alice told us the ‘Leave no trace’ rule.  We put the fire out with water and spread the remanents around until you could see no evidence of a fire.  Alice has special permission to have fires, but we don’t want to encourage others to light fires that may get out of control.  A big thank you to Alice for a super morning.  We all had a great time.

← Prev: Summer walks Next: Summer during a pandemic →

March has been a productive and busy month for us.  Check out what we have been doing. Easton Acorns  FCDC also work...

January and February at FCDC

As we approach the end of February, we look at what we have achieved over the past 2 months.  The nation is still in... 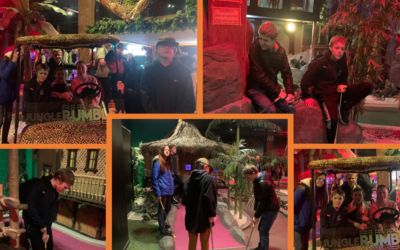 As you are aware from previous posts, we have created a group for our young members aged 11 plus without parent/carers...