My name is Sarah, I have 2 children Bonnie who is 5 and a half and Alfie who is 3 years old. 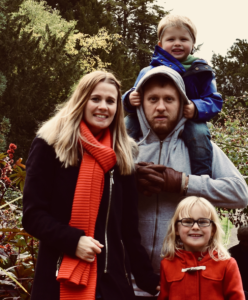 Alfie has a condition called Microtia and atresia on his left ear, Microtia is the greek name for “little ear”. 1 in 6000 babies are born with this condition.
We did not know Alfie had a little ear until he was born. I had just given birth at Southmead hospital at 3am and Alfie was being checked over in the incubator, then all of sudden several professionals were crowding round him, I asked “what was wrong”, and then I was told “he has an ear deformity”. I held him and looked at him. He was beautiful! I looked at his little ear and could see it was completely closed up! My husband and I were both in shock and extremely worried! I was devastated! The midwife who was a trainee said to me “Oh they can do so much for deaf children now”. This did not help at all, and if anything made me even more worried as I had just given birth and I then needed to take on board that he was deaf and had a deformity. Rowan my husband was sent home. There was no way I could sleep,I just stared at my beautiful boy. I kept thinking ‘what have I done wrong”. 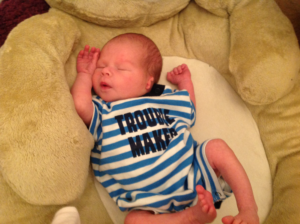 I work as a scrub practitioner in theatre and I remembered before I found out I was pregnant that I worked in a theatre (for about 10 minutes) where a patient had a cytotoxic injection. I wasn’t the scrub nurse for this case and I did not touch any hazardous waste but I kept thinking..its that. I felt so low. Rowan messaged me after going on google and told me Alfie has a condition called Microtia.

This is where our journey began.
Within 5 hours of me giving birth I was then sent home. No information was given to me about his condition apart from that we will see audiology in 3 weeks and plastics in a few months. We were told he would need a kidney scan due to other conditions associated with Microtia. Alfie did not even have basic hearing test at the hospital so we went home not really knowing anything. I was literally sick with worry. I could not eat and I could not sleep. Every time I went to eat I would gag. I kept going over what could have caused it. I also had a nasty cough in the early weeks and I dyed my hair. I wanted a reason why.After about 3 days I called audiology ,it was a Sunday and I left a voicemail message asking for help in complete tears, I wanted to know if he will be ok.What his future held!
Audiology were fantastic! Monday morning they got back to me and within 3 days Alfie was seen by them (I could of had another 3 weeks of just the most awful worry). I was told on the phone that Alfie had to be asleep and still for this test,Its a good job babies sleep a lot! They wanted to check his big ear was working and it was all down to this test. They wired him up to the machine and put headphones on him and about 2 hours in the audiologist told me that Alfie has impeccable hearing on his non Microtia side. I just cried into my husbands chest. It changed everything! If he had one working ear, he would talk, go to mainstream school, he is going to be ok! It was here that we were officially told Alfie has a condition called Microtia and bizarrely Alfies Microtia side responded to loud sounds so he can hear a little bit of sound. I also asked the audiologist if my job would have would have caused this or the nasty cold I had. He told me you can inherit this condition but it can also be a complete fluke and in our case we have no family history of it, it is a complete fluke. Even though I was told by every professional going that it was not my fault it still took me some time to accept that.

Following the audiology appointment Alfie had a kidney scan .(lots of appointments in the beginning! but it does die down!). The reason for this is that the ears form at the same time as the kidneys, at around week 8 of your pregnancy. It came back clear. At this point we felt so much more positive about Alfies future. Microtia can be linked to other syndromes like
Goldenhar ( facial palsy ) syndrome. Alfie has Microtia only on the one side.
We were offered a bone anchored hearing aid (baha) at around 6 weeks. We decided that Alfie has one working ear and did not feel he needed it.It was not pushed on us.

We had regular visits from our teacher of the deaf and I joined a lovely group called Acorns which I found out about from my teacher of the deaf and it has been an amazing support for all of us.It is the highlight of Alfie,s week, even now! Every week I learn something new from them whether its about starting school, how to help your child in noisy environments ect. I have also made a lot of close friends from there! A year and a half of taking Alfie there a little boy turned up with Microtia and atresia on the left ear also. His ear looks just like Alfie,s ear.The little boy is 6 months younger than Alfie and they see each other on a weekly basis now and are really good friends.

There is also a support group called Microtia mingle UK on facebook I have found it incredibly useful.There are children and adults with Microtia of different grades, some with reconstructions and implants and some without. I am also in a WhatsApp group for children with Microtia in Bristol and we regularly meet up with the children.There are around 11 of us in Bristol and the surrounding areas, the children range from babies to around 15 (i think). It is a lovely support group.To know you are not on your own. We are all on the same journey and its lovely to speak to someone who understands!
When Alfie was 9 months old he unfortunately had glue ear for around 9 months, so in that time we asked for a bone anchored hearing aid from audiology. It is amazing! We had 2 weeks of him not wanting to wear it but once it was on he kept it on all day! With this he has 2 ears. It really helps him to pick up those quieter sounds on the left side. The only problem I would say is that it picks up everything so whilst the TV is on and the dog is wolfing his dinner down Alfie would hear the dog eating his dinner as loud as the TV but it really is an impressive piece of kit and I know it makes a difference to his hearing.There was a time when Alfie would refuse to wear
a hat but he would keep his aid on! Alfies speech is amazing, he has never needed speech therapy and there was no balance issues. He is such a lively ,confident kind little boy his little ear has not held him back. Recently at preschool, he has just turned 3 years old and it was his second day and the children were read a story called “Dachy,s deaf” and after the story Alfie stood up in front of all of his new friends and said

“I have a big ear and a little ear and I wear a hearing aid to help me hear”.

When his key worker told me this I was so proud! The preschool is set in a church hall so as you can imagine the acoustics are pretty terrible for a hearing person, anyway we managed to get 2 lots of funding to make adjustments to the hall. We got 2 lots of funding because there are 2 children at Alfie’s preschool with bahas (I know! What are the odds of that!). They put padded boards on the walls and drapes on the ceiling. It really has made a difference. I have just applied for primary school for Alfie next year. He will be one of the youngest as he is an August baby. I have given the school plenty of notice and they are currently trailing a sound field system which will benefit a hearing child let alone a child with hearing loss. Technology is amazing now!

We have recently seen the ENT surgeon to discuss the implant for Alfie, we have been offered 2 types, one is a screw called an abutment and the other is a magnet under the skin. So this means Alfie will not have to wear his hearing aid on a headband. The abutment is a screw that sticks out of the scull and is supposed to have better sound quality, however the magnet is covered under the skin and the infection risk is a lot lower. We have decided for Alfie to have the magnet because he is so active and likely to knock the screw, he will have the operation next year (I think),when he is 4. 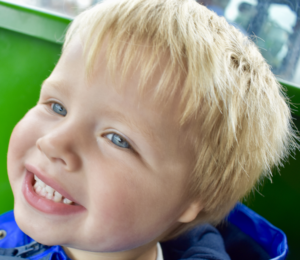 We kept his hair long until he was around 2.5.Not because I am ashamed of him, I just wasn’t ready for the stares. I didn’t want anyone to say
anything bad about him and its really silly because Alfie would not be the same without his little ear, he is perfect and I would not change him! But if he does want a reconstruction when he is older then we will fully support him. I hope he doesn’t want it as that means he is confident in himself. On occasions people do look but its not to be horrible, people are just curious because its new to them. I love the responses I get from children that are Alfie’s age, One said me (with the look of shock on his face) “Oh Alfies ear has come off”, I said to the little boy, “he was born without it”, “thats why he wears a hearing aid” to help him hear”, and then the little boy said ok and off he went to play. Younger children are just curious and once they have an answer they accept that.I realise that older children can be quite nasty which I have not experienced but if Alfie is self conscious of his little ear then he could have an ear reconstruction which happens when he is 10 years of age, so before secondary school.

I really wish I knew what I know now. Watching Alfie grow and develop fills me with immense pride despite his condition, he is a young boy that both myself and my husband would not swap for the world. I didn’t have anyone to talk to in the beginning that really understood how I was feeling. I have to say so far it has not held him back in any way and I would not be worried if I had another child with the same condition. Its only an ear after all. I hope what you have read helps in some way and I wish you all the best for your little ones future. Please feel free to contact me for any more information.